On Monday, August 9th, former Syracuse University professor Tom Richards ("TR") turns 79.  Mentor to a generation of photographers who have made their mark on modern photography, Richards taught and befriended such photographers as Stephen Wilkes, Seth Resnick, Bob Sacha, Clint Clemens, Ed Kashi, Nancie Battaglia, Walter P. Calahan, Nancy Leigh, and myself, as well as Sean Callahan, the founder of American Photographer magazine, which, for the ten years he edited it, was a substantially different magazine than its successor, American Photo.

Among us, we've published more than a dozen books, on subjects ranging from a biography of Margaret Bourke-White, to a book on Ellis Island, and one on India; photographed luminaries such as Bill Gates and Bruce Springsteen; and worked for magazines ranging from Life to Time.  Seth Resnick's workshops on digital imaging, Bob Sacha's numerous photo essays for National Geographic, and Clint Clemens' groundbreaking use of computers in his photography—all of them have in common the influence, the teaching, and the drive of the man behind those two initials, "TR." 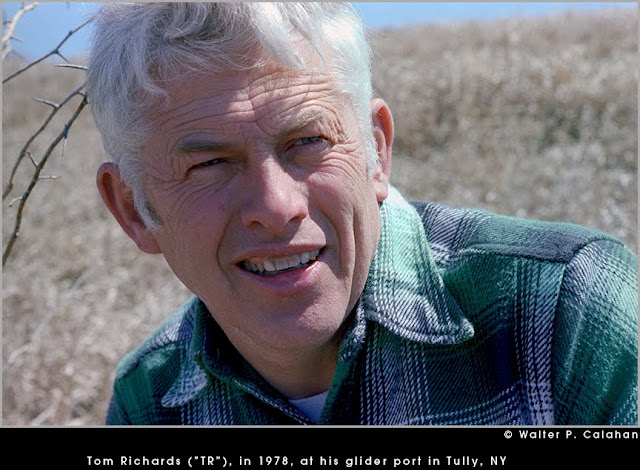 I took a course in color printing and color theory from Tom, in the late Sixties, but my own recollections of that time remain myopic—blurred with the passage of time, much like the Vaseline filters that were the rage in those days, along with fisheye lenses and LSD.   Yes, "TR" had me pegged.  'Timothy Leary?   Doctor Timothy Leary?  What kind of doctor is he?' he would ask sarcastically as he dashed up the back stairwells of Newhouse  1  between his third floor office and the lab, his white lab coat flapping in his wake. recall working for the student newspaper, photographing the FBI photographing the Berrigan brothers (renegade priests and anti-war activists), and being pinned against a wall by TR almost every day, in a jovial bout of questioning about some arcane corner of photographic technology.  One time he started rattling off Wratten filter numbers and asking me to describe their color--#12, 15, 21, 23, 25, 32, 47, 58...we kept going for 5 minutes, when he got all the way up to #102 and flashed his schoolboy grin at me, his eyes sparkling, and his eyebrows arched as if to say "Gotcha Meola !"   Until I simply looked at him with no emotion and said "lime green."

Those encounters have stayed with me to this day. Friend and former magazine editor (now retired, but currently Adjunct Professor at SU) Sean Callahan, had these thoughts about this particular side of TR: "His exercise with you with the Wratten filters is a good example of the level he would go to challenge the individual. I doubt that he would do that to any other student, even a grad student, because it is pretty arcane stuff. Tom didn't mind taking on the challenge you were as a student, and actually relished it because he had made his mark in the profession, so he was comfortable as a practitioner. I believe this gave him the foundation to be a creative teacher."


Yet, to be honest, in those days I was far more concerned with being drafted. I only had one eye on photography; my real focus was what was going on in Vietnam.  I was a full blown child of the Sixties.  Again, Sean, who somehow has maintained more brain cells than I from those heady times, recalls the following about my introduction to TR:


"An English major with thoughts about being a writer (NOT a photographer), you were a live-at-home townie with little interest in campus activity until you responded to my call for help at the 'Daily Orange' (S.U.'s student newspaper) and you presented yourself with a list of hardware that was more modern and extensive than anything in the newspaper’s darkroom. ('What the *#@^*%#@??? is a Macbeth Quantalog Densitometer used for?')


I kept prodding you to take a course with TR at the J-school and you only agreed to meet with him when I made the argument that you could easily boost your grade point average with a photo course.  I had sung your praises to TR prior to the meeting, and don’t recall what transpired between you, other than he had to get department head Fred Demarest’s OK since you obviously were going to have to come in at an advanced level and work in color (Fred’s domain.)" 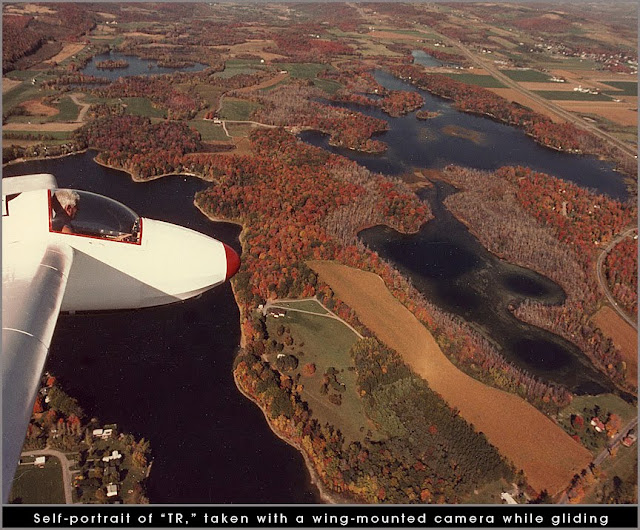 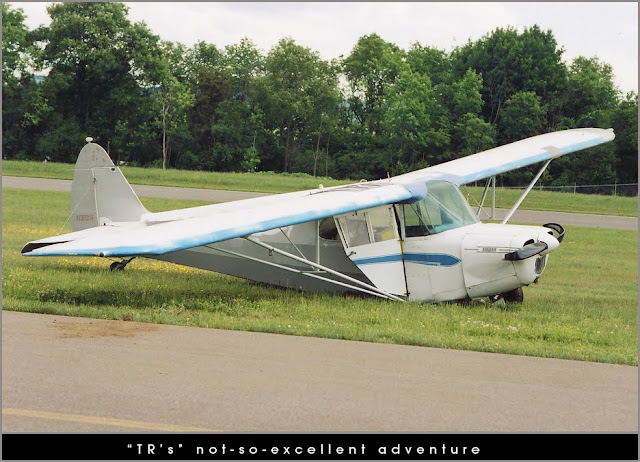 One of my photo heroes at the time was Ernst Haas, and when he was invited to talk at S.U., I was front and center.  Haas was renowned for introducing color to magazine photography, notably in Life, in the early 1950s with his sometimes lyrical imagery.  Of particular note was an essay he shot on bullfighting in Spain using the original Kodachrome (ASA 10) and slow shutter speeds to create some remarkable (for the time) impressionistic images. Haas' appearance obviously had the effect on his students that TR hoped for.Shortly thereafter, I got an assignment from the the yearbook editor to show the university's diversity. With refrains in my ears of TR's mantra to always look for a new way of seeing something that might be tried and true, I took a young Nigerian exchange student out to the newly constructed terminal at Syracuse's airport, and panned the camera as he ran against a bright red, enameled brick wall, his native robes unfurling in the wind.  It was the first time I knew I had caught TR's attention, and that I felt I had made a leap in the way I saw. 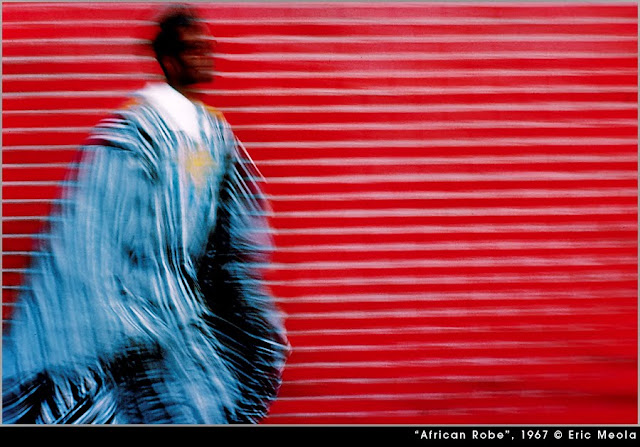 TR's edgy irreverence with students always came with a demanding playfulness. He constantly challenged you to make better pictures—sometimes even in competition with himself. Just to keep his edge, TR would be the AP stringer for SU football games. (This was the Floyd Little/LarryCzonka era when SU was always in newsworthy contention for NCAA glory.) TR would help qualified students get sideline credentials. Sean sometimes got a credential for UPI, thereby putting him elbow-to-elbow with TR during the game. TR would heckle him all during the game but never offered any guidance.  This was, after all, the real world, and the student needed to learn to survive in it.  Later he would ask to see the student's take and offer helpful criticism, albeit sardonically delivered.
As Sean recalls, "Perhaps the biggest event of my sophomore year was the week I beat TR to the Sunday NYTimes sports page. That was the only time UPI edged AP in Syracuse that season but it was enough for me. TR grudgingly mentioned it in class the next week, claiming it was an example of egregious photo editing. I beamed and it was obvious that he was proud, too—but not too obvious about it such that I would get cocky."
Photographer Ed Kashi, got a taste of another side of TR:
“I have many memories of TR, and not all of them are easy or pleasant. He never made me feel a part of the group and was, I felt, quite tough on me. But what he did was prepare me for a life in photography.  When I was a senior and about to graduate, I asked him to write me a letter of recommendation. What I got back was unusable. He basically ripped me apart in that letter. It was a sobering lesson for what was about to come as I entered the 'real world' of professional photography.
TR was also a very kind man, generous and strong. If he liked you, there was no end to what he would do for you. My sense is that he expected people to give it their all and learn what it meant to be mature and professional. His judgment of me, way back then, was probably good for me. He kept me honest and humbled; and forced me to conjure up my inner strength and resolve, which prepared me for the future. His tough expectations were a good thing for an undisciplined, but eager, kid.”
Here are recollections of other former students who stand in TR's debt:
"TR" and the First 79, CONTINUED