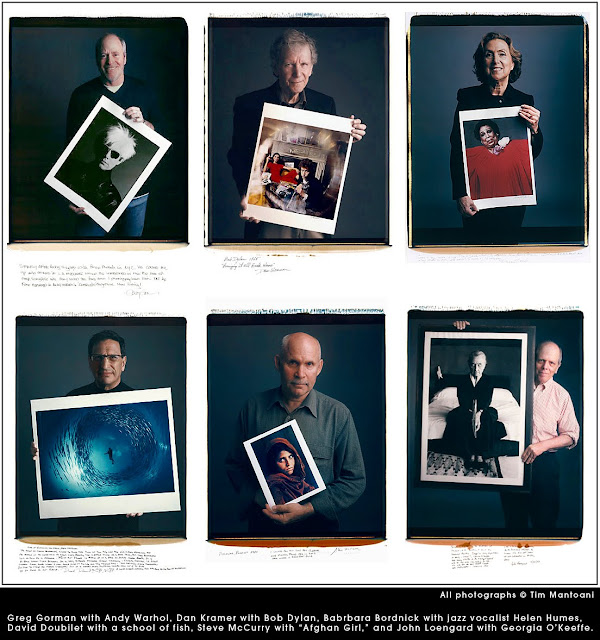 " I don’t think there are many editors who could give me the assignments I give myself."
- Ernst Haas, in a letter to the editors at  Life magazine, in 1949, turning down a staff position.
The question I am most asked by young photographers is, "What words of advice do you have for us?"  Or, "Is it still possible to succeed in this economic environment?"  The short, acerbic answer might be "No."  Yet every time, I repeat the same mantra: "Find a subject you are passionate about and photograph it like it's never been seen before."
Tim Mantoani's self-assigned project, titled "Behind Photographs," is a testament to just how far one photographer can take that dictum.  In 2006, Tim made his first exposure, of the late, great Jim Marshall, holding his famous portrait of Johnny Cash "flippin' the bird."
The premise is simple: Use the Polaroid 20x20 camera to make portraits of many of the world's greatest photographers, holding one of the favorite images they have made.  One hundred and fifty photographers later, I interviewed Tim about his project—why he started it, what it means to him, and how far he's willing to take it.  So far, he's had to refinance his house, and no one has given him a dime.  I thought his passion might be instructive for those who raise their hands and ask me "What advice can you give us?"
- Who was the first photographer you photographed for the project and on what date ? Jim Marshall and Michael Zagaris in San Francisco on Dec 27, 2006. As digital cameras came into my day to day commercial work, I had been forced away from shooting large format portrait work. Clients just didn't want to take the risk or spend the money. I missed shooting large format and had seen the 20x24 Polaroid for rent. The writing was on the wall that Polaroid film was going to be "fading away", so I rented the camera for a 1/2 day and asked Jim and Michael to come in for a portrait. I wanted to shoot something that was important to me. I asked each of them to bring a print to hold, it all started there.
- Do you collect photographs?  You have a pretty good sense of the modern "classics."
I really feel like this project is me collecting images. Honestly, I feel like every photographer is a collector, we collect pictures that we take. Several of the photographers that I have photographed have been kind enough to give me a print. Jim Marshall and I spoke often after I photographed him and just a month prior to his death he sent me the Johnny Cash photo that he held for his portrait session.
- Is a book in the works?
I have seen this project as a book from the beginning. It is a difficult time to find a publisher, and I have had conversions with a few houses. My problem is that I want the book to be big enough so the images will read well and most publishers don't see profit in that model. I have also been researching self-publishing. I hope to have a book out in the fall of 2011.

- Will there be a 20x24 self-portrait?
No plans at the moment.
- What exhibits have there been?
I have had a few partial shows of this work. I showed most of the California shooters in a show at MOPLA in 2009 and also had a show at Brooks Institute of Photography in Santa Barbara, The Farmani Gallery in Brooklyn and a few of the images are currently at Ogilvy. By doing shows at ad agencies, I am hoping to generate some advertising work to help with the cost of the project. I also had a show in New York for the opening of a clothing store, "7 For All Mankind." It was during fashion week and was a unique way to show some of the images. Since the originals are so large, it will take a huge space to show them all.
- Did you try to get funding ?
Been trying hard for the past couple of years.  It has not been easy to find someone to support it. In the photo industry, it isn't digital and it isn't output, so the direct tie to product sales is not something that works for most companies.
- The project seems to me to be a lot more than answering your own need to shoot large format—for me it seems it's part "homage"...photographing the images and the people who made the images that "spoke" to you as you grew up wanting to become a photographer...is there some of that in there?
For sure—I have been inspired by so many great photographers over the years and this was a way to honor them. As photographers we get assignments shooting athletes or musicians or poets, etc....but rarely is an assignment handed out where a photographer gets to photograph other photographers. I found a unique balance in the simplicity of these portraits with a balance between the photographer and their image. Both are of equal importance. I feel that people need to be reminded that photographers took these images, not cameras. Many of these images have helped shape history and I hope this project will be a way for future generations to appreciate these dedicated individuals. 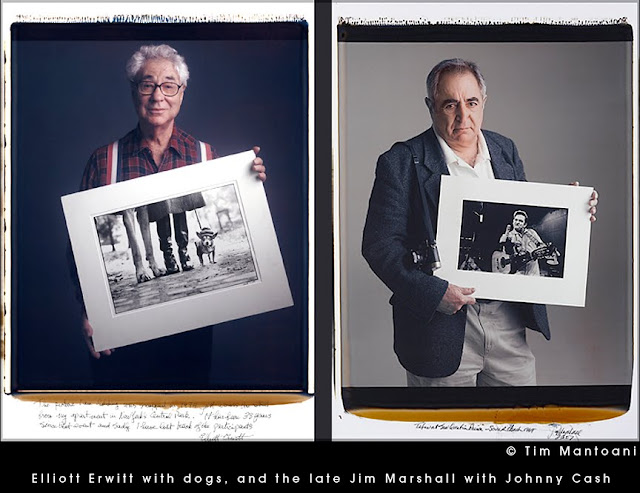 - Were there ever moments of self-doubt?
The thing what has kept me going the most is the support I have received from people like yourself that have encouraged me to continue. I know many of the participants have thought I was nuts, but that is what fueled me as well. Numerous photographers have asked to use my portrait to promote themselves—that is a huge honor for me. At Jim Marshall's memorial, Joan Baez got up and sang a few songs.  Behind her were images of Jim, my portrait included.
- Did any assignments come out of this ?
After Communication Arts ran a feature, I reconnected with an old client. This led to a series of portrait jobs earlier in the year.


- Can you say with conviction that the publicity around this project has been a boost to your career?
Yes—I have been published around the world and will be showing some of this work at Photokina, as well. This interview is a prime example, I met you through this project and who knows where that collaboration will lead us?


- Knowing what you know now...would you do it over again?
Without a doubt!  I'm still shooting. There are a few more people I would love to archive while I have the opportunity.  So far I've photographed close to 150 photographers.
- What was the cost of a 20x24 back then as opposed to now?
$75 per exposure, now $200.
- Do you still have access to materials?
Yes. The 20x24 studio in NY purchased the remaining film stock and chemistry pods. The old pods are starting to fail, so they are making fresh pods for the old film. I just got my first batch. However, all the film stock that remains is what Polaroid made. The equipment no longer exists. The hope of the 20x24 studio is find someone else, Fuji perhaps, to make a new film base.
-Have you received any funding?
Zero, this project has been a labor of love and passion. I have been doing my commercial work to fund it and have had to refinance my home.
-What has it cost you, personally, in terms of expenses not reimbursed?
I know a bunch...but honestly I have not tried to determine that number. If I was too focused on the cost, I would have never done it.
-Has anyone turned you down?  I notice Annie Leibovitz is missing.  Why ?
I have tried Annie's studio several times with no luck. I honestly have no idea if she has even seen my proposal or project. I do email her studio each time I am in New York, just in case. Several people have said no and each have their reasons or fears. More women have said no than men.
-In which 20x24 studios have you shot the project?
I have shot with the 20x24 cameras in San Francisco and New York. In addition, in Boston, I shot with Elsa Dorfman's 20x24 and I purchased a 20x24 Wisner so I could shoot on the West Coast.
-Any interesting stories?
I have found each shoot to be educational. I think one of my favorites is that the day I photographed you.  Dan Kramer came in later that day and held his "Bringin' It All Back Home" Bob Dylan photo. In his image is a woman in a red dress. In the first few Polaroids, he kept looking at your portrait and the red in the image you were holding. Dan wasn't pleased with the way the red in his photo was reproducing and kept saying, look at Eric's image, let's try another. We adjusted lighting and a bit of filtration and still no luck. Finally Dan looked at me and smiled and said, " Well, that's Eric Meola, his reds will always be better than mine!"
-Did you have a criteria for the people you chose?  Some seem to be for a specific photo, such as Nick Ut, whereas others, for their specialty.
It is a bit of both of these things. Some people are known for a specific image, while others have been passionate about documenting a specific subject. I really have not tried to limited the criteria too much because I didn't want to let my own preconceptions blind me to learning. Many of the photographers are people that in the beginning I didn't know, but were recommended to me by other shooters. All of these people are passionate about their work. I wanted to document a wide range of people and subject matter, a survey of the industry.
-Who's next on the list?
I am still trying to round out the work with a few more nature shooters and have not been able to connect with them yet. I would love to include Salgado, but again, timing and location are difficult.
- What did you get out of this...for your psyche, your own sense of what photography is about?
This has been such a rewarding project. 10 years ago, I found out I had a tumor in my leg and was told that I would likely die. Surviving that experience has taught me that life is the real payday. I am blessed to have a career doing something I love so much. I feel proud that this project has historical importance and will live beyond me. Most of the photographers in this project were just doing what they loved when they made these images. I think young photographers have to realize that without passion behind your images, you will have nothing compelling. Every photographer needs to go out and shoot subject matter that they love. I know you have spent years on the road shooting—it takes that type of passion and dedication to build a beautiful body of work.
Posted by Eric at Monday, July 19, 2010