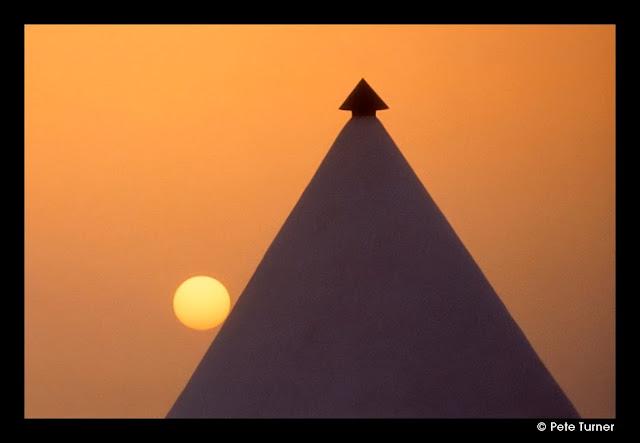 In its January, 1981 issue, American Photographer magazine published an article by Sean Callahan called “Countdown to Moonrise,” in which astronomer David Elmore of the High Altitude Observatory in Boulder, CO, calculated that Ansel Adams’ famous photograph “Moonrise, Hernandez, New Mexico” was photographed on October 31, 1941, at 4:03 PM local time. This was later refuted through independent analysis by astronomer Dennis di Cicco, who noted issues with those calculations and that “Moonrise” was photographed the next day at 4:49:20 P.M.

Who cares ?
I’m not sure that’s the question.  I think we look at certain iconic images and want to know more about them. Where were they taken, when, why, and under what circumstances?
One day, while on the phone with photographer Pete Turner, I asked him a question about his famous image “Rolling Ball.”  Did he think “it” was still there?  The “it” is the “pyramid” in the image, the silhouette of an African “hut," with an arrow-like smokestack at its top pointing up.  But it’s the sun at sunset that’s the subject of the image, the “rolling ball.”
The image was made in 1960, when Turner was near the end of an epic 7-month journey transecting Africa from south to north.  Turner, who had graduated from R.I.T. in the late Fifties, had just landed his first major assignment, to photograph a caravan of Airstream trailers as they traveled from Capetown to Cairo.  Somewhere north of Khartoum, in the Sudan, Turner came across the lone structure and framed the triangle within the rectangle of his camera’s frame, adding the third element of geometry, the circle, by placing the sun right at the edge of the hut so that it appears to be rolling down the side of the roof.  It’s the title, of course, that completes that illusion.
Later that same year, the image would become part of the permanent collection of the George Eastman House.  And a photographer’s career would shift into high gear.
And so, my question, “Do you think it’s still there?” met with a long pause, and then Pete said “Sure, it could be...who knows...it was in the middle of the Nubian desert, far from any town...all by itself.”
We talked about a few other things, and then hung up.  A few days went by, and then, one afternoon, while sitting in front of my computer, I started typing into Google.  I didn’t have much to go on.  I knew that Pete had been somewhere between Khartoum and a town in the north called Wadi Halfa, near the border with Egypt.  Great.  Not too bad.  Nine hundred kilometers.  Taken when?  1960.  Sure.   But I had another piece of the puzzle.  I was, according to Pete, looking for a place called “Station Number 6.”  The hut was near some abandoned trains and tracks in the desert, and as trains connect Wadi Halfa to Khartoum, the reference was, most likely, to a train station or layover.  But would the “hut” still be there?
And then, I came across a reference to a collection of memorabilia of a William Russell Grant Wollen:


Durham University Special Collections Catalog: William Russell Grant Wollen.  Photographs contained within a leather-bound album dating from May 1898 to 1899. The album covers Wollen's service in the Sudan, particularly the construction of the Wadi Halfa - Khartoum military railway during the Nile campaign of 1898.
Durham University in England had his collection and someone had carefully catalogued it, but the list was very long.  Why was "Station No. 6" triggering the list to show up in  a Google search?  I scanned my eyes down the list and couldn't see why.
I copied the pages-long list by scrolling down it with my cursor, and pasted it into a blank Word document which lets you search for a certain word, and then I did a search for "Station".  The third occurrence listed two photographs "SAD. A1/81 and 82."  While stationed there Wollen took two photos and captioned them "Station No. 6, between Wadi Halfa and Abu Hamed."  It was the "Abu Hamed" that turned out to be the key, as it moved me halfway up from Khartoum.
And then, I hit the “mother lode." I typed in "Distance, Abu Hamed to Wadi Halfa," and came across two photos in a Flickr gallery by a photographer named Kenny Carruthers who in his own words, explained that "...in October of 2005, I purchased a one-way plane ticket from San Francisco to London. After a few days in London, I caught a second flight to Barcelona and from there I traveled overland across Europe, through the Middle East and then down the east coast of Africa, finishing in Cape Town."
Although I had used Google Earth to zoom in and follow the terrain, seeing the ground view in Carruthers' photographs, and particularly the conical buildings with their stovepipe "arrows" pointing to the sky, was, to say the least, electric: 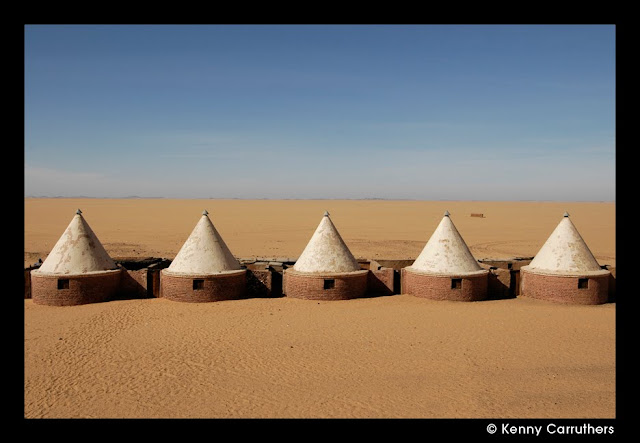 It's another story altogether about tracking down Kenny Carruthers, and another one altogether as to how aerial photographer George Steinmetz helped me confirm that I had, indeed, found the spot where Turner made his "rolling ball" image.  After several phone calls, and scans of Google Earth, George and I honed in on the spot as seen from a satellite, and there they were...the five circular specks on the ground that Carruthers came across in 2006, and Turner nearly a half century earlier.  Where there had been one, there were now five.  And what are they used for?  Storage for the railroad?  Ahhh.  Another question waiting for an answer...and someone else's blog. 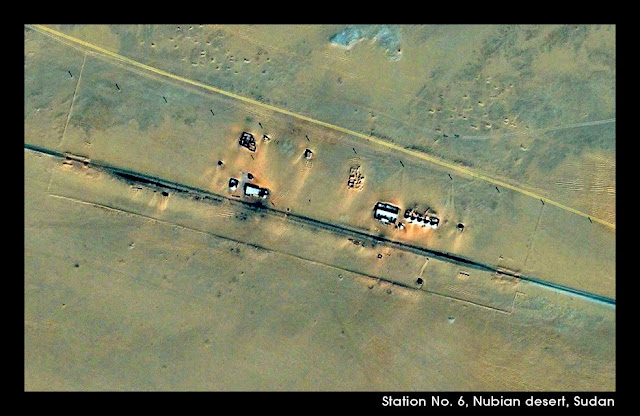